Migraines and I have had an ongoing love affair for many years now.

Migraines suck. If you have never had one, it’s hard to convey just what someone experiences when they have a migraine. It’s a “full-being” experience. It’s not just a headache. There are crazy blind spots, and nearly unbearable pain in your skull, and life-sucking fatigue, sensitivity to light and noise, and nausea… you know, like you feel like puking out all your internal organs. You pretty much feel like you got hit by a truck, stomped on by a dinosaur, and shot through the head… as depicted in some of these drawings. But migraines often bring depression, confusion, and dissociation (a feeling of being detached, separated, abandoned by the rest of the world). Sometimes your speech gets screwed up and people wonder if you’re having a stroke. And sometimes you feel euphoric, like everything is going to work out for everyone and you just want to hug everyone in the world. (I typically get that before a migraine strikes. I take it as a bad omen when it happens.)

For decades I have kept track of my migraines in a journal. Then at some point, January 7, 2001, to be exact, I scrawled a very primitive drawing to make note of a migraine. 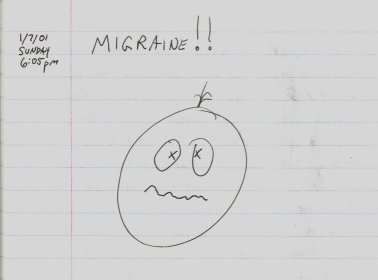 Thus it began. I decided to fight back through art whenever I had a migraine. When you are literally down and out, what do you have to lose? Grab a Sharpie and resist the inclination to give up and die.

You will note a progression from primitive cave drawings to near Renaissance quality masterpieces. Well, unlike the Renaissance masters, my work did not improve due to the encouragement and backing of wealthy sponsors such as the Medici family. But I did have MEDICINE! Good stuff too! Several years ago a doctor prescribed a drug called Fiorinal. Perhaps there is a correlation between the introduction of the drug and the increased imagination in my drawings.

I speak hypothetically, of course. My art is a product of my own genius and the influence of drugs has nothing to do with creativity. I’m sure Andy Warhol would agree. (Note: That was sarcasm right there, in case you missed it.)

Currently, I have eleven galleries of migraine art on the website. These cover the years 2001 through 2016. You can view them by using the links below or by going to the Migraine Art link on the navigation bar above.